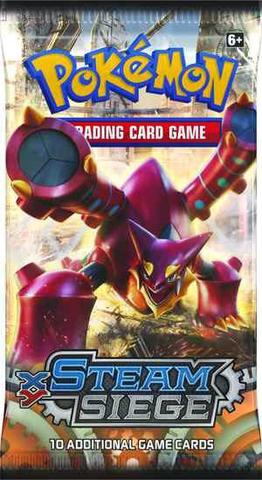 The Pokemon Trading Card Game just got stepped up to a whole new level. Read more to find out about our first ever Pokemon: Steam Siege draft!

On Sunday, September 4th, check out our first ever Pokemon Steam Siege draft happening at 12pm! The draft format is played like so: each player has three packs that are opened once at a time, each pack has ten cards. Each player then picks the card from their pack that they like the most or would like to make a deck with, starts a pile directly in front of them, and then passes the remaining cards to one of the players next to them, with each player passing in the same direction. This continues until all cards from all of the packs are divided among all of the players. After the drafting process, all players will make a 30 card Pokemon deck using however many cards they drafted. Basic Energies are for open use and can be pulled from outside of the draft.

Players will then play a tournament with these 30 card decks, playing 4-prize games. Entry is $15, and it's a whole lot of fun! Ask one of our associates if you have any questions. The store will have some basic energies for everyone to use, but it is STRONGLY encouraged that you brings some of your own. We'll see you then!